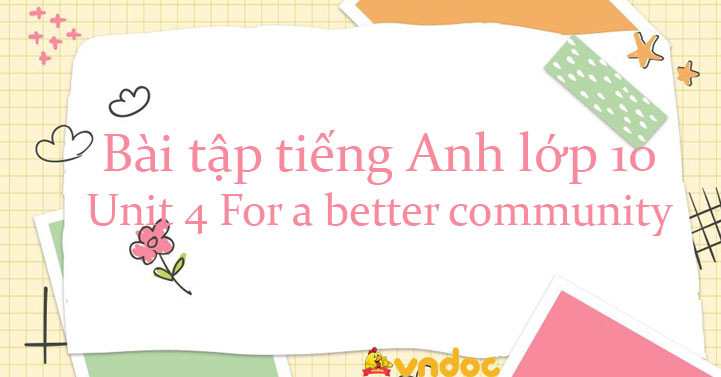 Exercise 1. Mark the letter A, B, C, or D to indicate the word whose underlined part differs from the other three in pronunciation in each of the following questions.

13. Fundraising for charity is a ____ thing for everyone to do to help the community.

14. They were so ____ about joining the local volunteer group that they couldn’t sleep last night.

16. Volunteers become well ____ of the problems facing the world.

17. English teaching is considered a good example of a volunteer job which often turns ____ a career.

18. Mahatma Gandhi fought for the rights of coloured people in general and the Indians ____.

A. in time B. in particular C. in contrast D. in fact

19. A/an ____ is a person who needs others to take care of him/her, because of illness that he/she had for a long time.

20. Mr. Chen is more _____ because he has finally agreed to allow his daughter to join an overseas volunteer organisation in Africa.

A. single-minded B. narrow-minded

21. Most of the students in that special school are making good progress, but Michael is a ____ case.

22. A lot of generous businessmen have ____ valuable contributions to helping needy people.

23. Poor students cannot ____ an abundance of presents on their birthday.

A. look forward to B. put up with

24. Befriending can offer volunteers the opportunity to provide support and friendship to a person who may be going ____ a difficult period.

25. Volunteer organisations are generally small-staffed, so they need to ____ lots of volunteers for a huge event.

26. You’d better ____ a commitment to being a volunteer on a regular basis.

27. They visit a retirement home and ____ time doing fun activities with the elderly who lack immediate family.

28. Both community ____ and volunteerism are an investment in our community and the people who live in it.

29. ____ being the CEO of Microsoft, Bill Gates is also one of the world’s greatest philanthropists.

A. Aside from B. But for C. Except for D. In addition

30. Their massive salaries let them afford to give ____ huge amounts to charities.

31. When you get involved in a volunteer project, you are able to ____ your knowledge into practice.

32. Volunteers can work with many ____ children who were harmed by Agent Orange in childcare centres.

33. Both CARE and Oxfam organisations have programmes to help people in underdeveloped countries ____ their lives.

34. Many international volunteer organisations are trying to find a ____ to the problem of world hunger.

35. For a cleaner and greener community, everyone should ____ the amount of trash and take care of our environment.

36. Thanks to everyone’s efforts, we can do ____ to make school a meaningful place for students living in poverty.

37. On the door of the house where Louis Braille was born are the words ‘He opened the door of ____ to all those who cannot see.’

38. University students are willing to get involved in helping the old and ____ people.

40. Football superstar David Beckham has a huge ____ for kids in need.

Exercise 4. Put the verbs into the correct form (the past continuous tense).

Exercise 1. Mark the letter A, B, C, or D to indicate the word whose underlined part differs from the other three in pronunciation in each of the following questions.

Exercise 2. Mark the letter A, B, C, or D to indicate the word that differs from the other three in the position of the primary stress in each of the following questions.

Exercise 3. Mark the letter A, B, C, or D to indicate the correct answer to each of the following questions.

Exercise 4. Put the verbs into the correct form (the past continuous tense).

50. Daisy___was preparing____ the buffet while I was looking for the drinks. (prepare)