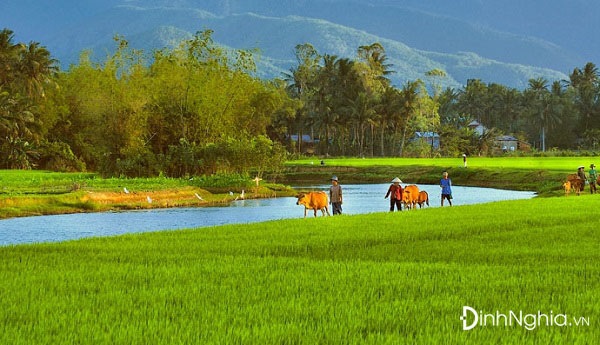 Literature is always associated with the times and people. Each different era will have different literary mainstreams. Entering the period of resistance against the US, literature still writes about great topics of the era such as soldiers, country, war, etc., but with a different inspiration that is both heroic and simple. In which, the most prominent must be mentioned is Nguyen Khoa Diem’s ​​epic poem “Face of the Aspiration” by Nguyen Khoa Diem. With a new approach, Nguyen Khoa Diem has breathed life into a concept that seems familiar to everyone – Country. Chapter V of the epic titled Country clearly shows that concept – an idyllic country familiar to everyone, especially evident in the first nine sentences.

General introduction about author Nguyen Khoa Diem and his work

Before feeling about the work as well as analyzing the first 9 sentences of the poem Country, we need to understand the main features of the author as well as the content of the work. Nguyen Khoa Diem belongs to the generation of poets in the anti-American era to save the country. Nguyen Khoa Diem’s ​​poetry is sometimes majestic, vibrant, sometimes lyrical and full of enthusiasm, but all exude a passionate beauty with people. His poetry has a delicate combination of lyricism and political theory. That has created an attraction for his poetry, creating a unique voice that is both passionate, passionate and contemplative.

Prominent images in his poetry are young intellectuals, hard-working people with passionate patriotic hearts. The epic poem of the road surface aspiration was completed by the author in the Tri-Thien war zone in 1971. The work is about the awakening of urban youth in the South about the country’s mountains and rivers as well as the mission of their generation.

The poet called on people to take to the streets to fight and join the rhythm of the resistance war against the American imperialists. It can be said that chapter V is the best chapter that shows one of the most basic and core ideas of the epic – the perception of the country.

This is the premise that plays an important role and is the fulcrum for the development of this entire epic. The country that appears in his poetry has a rustic and genuine beauty with harmony between people and landscapes, between the sacred past and the heroic reality, between the responsibilities and duties of the youth and the country.

When Analyzing the first 9 lines of the poem Country, we will see the country appearing through the poet’s sketches. It is the image of a country with long-term existence, a very familiar but idyllic country, associated with working life.

The long existence of the image of the Country

Chapter V opens with a very emotional tone. The opening line of the poem has affirmed the long-standing existence of our country, our people

“When we grow up, the country already exists”

In these lines of poetry, Nguyen Khoa Diem offers a special interpretation. The appearance and existence of the Country is tied to the family. That existence is obvious. Throughout the four thousand years of the nation’s civilization, the country was formed and developed.

Those four thousand years are encapsulated in a simple yet true verse “When we grow up, the country already exists”. I don’t know how long the Country has existed, only know that the Country appeared a long time ago, before the appearance of “I”. The question “When did the country start” has been asked since ancient times and is explained by fairy tales about the human world from the beginning of time such as the story of Lac Long Quan and Au Co.

Two words “Country” sacred is solemnly capitalized, expressing the author’s proud affection for a sacred land that has a process of formation and development as a specific person. Phrase “already have“The affirmative meaning appears to confirm one thing: When analyzing the first 9 sentences of the poem “Country”, we see that this image was formed a long time ago and originates from the closest and dearest things in life. material and spiritual everyday, easily found everywhere.

Analyzing the first 9 sentences of the poem “Country”, we see that if in the first sentence is an affirmation, suggestive of time, in the following lines of poetry, Nguyen Khoa Diem has given evidences for the existence of development. development of the Country.

The country started with the betel nut she now eats

The country appears in the most idyllic things. After answering the question “When does the country” come from, Nguyen Khoa Diem dedicates the next lines of poetry to answer another question “Where is the country?“. The phrase “once upon a time” is a familiar opening phrase of Vietnamese fairy tales, reminiscent of a beautiful distant memory of childhood.

Each person’s sweet childhood memories must always have the appearance of fairy tales like the lines of poetry that the author himself wrote.

“I grew up in a very real belief

How much happiness is there in life

Even to the bitter stamping buried

That Miss Tam also returned to be the queen

The bird eats it and then returns it to me.”

These are the stories of Tam Cam, Eating star fruit, paying gold, Thach Sanh, etc. Thereby reminding us of the stretch of a long history, evoking an image of a poetic country – where people live in harmony, stick to love, where justice is done. Fairy tales always leave us with a desire to reach for truth, goodness and beauty. And that’s also how our forefathers taught the morality of being a human over thousands of years of history to the next generation. The poem evokes the reverberation of the subconscious. These verses also refer to ancient legends:

Grow up to fight the An enemy

People’s health is as strong as an iron horse

I hate me forging steel into whips

The fire of battle I sprayed in my face

The murderers robbed the country and harmed the family”

The country is associated with the beauty of the long-standing cultural traditions of the country and Vietnamese people. The development of the country is also associated with the sense of fighting against foreign invaders. That is expressed through the phrase “Our people know how to plant bamboo to fight the enemy”, reminiscent of the legend of Saint Giong uprooting bamboo by the roadside against the An enemy. “Grow up” is a metaphor for national strength – the strength of both physical, material and spiritual. When there is a foreign invader, every citizen will fight hard to protect the country, knowing “to embody the shape of the country” as Nguyen Dinh Thi once wrote:

“The gun exploded in anger

Vietnam from blood and fire

Shake off the mud and stand up bright.”

Every successful resistance war has had great contributions from the people. Therefore, in the interpretation of Nguyen Khoa Diem, the process of national formation and development is seen in relation to the people.

That development process, from “yes”, “start”, arrive “grow up” of the country is not recognized in the historical facts of the historians, not in the discovery of territorial expansion by the geographers, nor in the regime change. class of politicians that is seen in the most idyllic aspect – that is the life of the people. The country is formed in the people, develops with the people’s life.

When analyzing the first 9 sentences of the poem “Country”, the reader can see that if in the above lines, Nguyen Khoa Diem evokes the image of a grandmother chewing betel nut, sitting and telling fairy tales, then the next two lines come up. It’s a picture of mom and dad.

“Mother’s hair is pulled at the back of her head

Parents love each other spicy, salty, and spicy ginger”

The image of her mother’s hair “tipped at the back of her head” evokes the mother’s diligence and sacrifice. Those are the good traditional virtues of Vietnamese women. Parents come together with love, live with fidelity. “Spicy Salty Ginger” evoke hardships, bitter tears, and worries in daily life. This is also the fulcrum for the development of a family, reminiscent of a folk song

“Hands with a plate of salt and a cup of ginger

The family is a social cell that affects the development of society. Family behavior also affects how people behave in relation to the country. When analyzing the first 9 sentences of the poem Our Country, poet Nguyen Khoa Diem was very subtle when he came up with this philosophical substance.

Analyzing the first 9 sentences of the poem “Country”, the reader finds that this image also appears in familiar everyday things:

“The truss, the pillar of the name

The Country from that day…”

“The truss, the pole” are things associated with working life“grind, pound, grind, sieve” are the familiar actions of farmers in each degree of rice maturity. The country is not far away but is present in every little thing and action. These actions and things evoke the image of a farmer. It was a farmer who worked hard in production. That hard work is expressed in idioms “one sun and two dew”.

List of actions “grind, pound, grind, sieve” sequence, both suggest a sequence of consecutive actions and show the enthusiastic and tireless labor of the farmer. The rhythm of the poem is fast and joyful like a labor song full of love for life.

Talking about the image of a farmer, we often think of the image of a person who is hard at work “Sell your face to the earth, sell your back to the sky”, evoke the quiet dedication of the farmers. That dedication is unfolded according to the length of the verse. The last line of the poem with three dots creates a reverberation for the whole verse, which is thought-provoking. 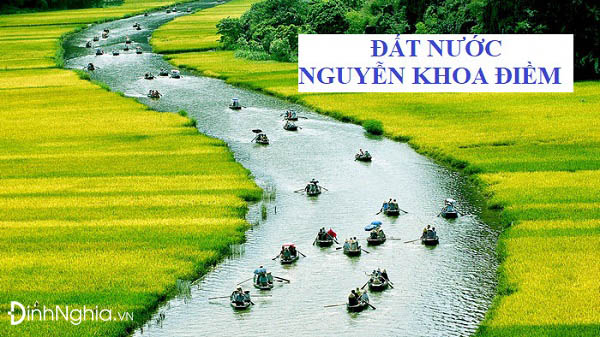 Comments when analyzing the first 9 sentences of the poem “Country”

Simple words are like everyday words, but they contain a strong evocative power. The tone is cheerful, natural but full of life, because it is close to the daily words that the verses easily touch the reader’s heart more than ever.

When analyzing the first 9 sentences of the poem Country, we see that Nguyen Khoa Diem has deposited in it many feelings as well as new concepts about the country. An idyllic, closest and most honest country appears before the reader’s eyes. It is a country of the people, built and decorated by the people themselves. It is a new thought full of discovery with the imprint of Nguyen Khoa Diem, the crystallization of love and national pride in each poem.

Above are the feelings and analysis of the first 9 sentences of the poem Country, hopefully bringing you useful knowledge for the learning process. Good luck with your studies!